Over on my e-book blog tonight, I posted the following.

Earlier this month, Al Mohler, the President of the Southern Baptist Theological Seminary in Louisville, Kentucky published an important article entitled, The 2012 Preaching Survey of the Year’s Best Books for Preachers.  It’s an article that I believe every preacher should read, no matter what your denominational background.

At the end of the article Mohler includes his annual Ten Books Every Preacher Should Read. Many of the readers of this blog are pastors. I hope this post is a blessing to you as you shepherd the church. My hope is that many church members will read the books in this list as well.

Because many of these books are Academic books, you’ll find that the Kindle prices, while higher than most books on this site, are much lower than the hardcover or paperback editions.

The Juvenilization of American Christianity by Thomas E. Bergler

Pop worship music. Falling in love with Jesus. Mission trips. Wearing jeans and T-shirts to church. Spiritual searching and church hopping. Faith-based political activism. Seeker-sensitive outreach. These now-commonplace elements of American church life all began as innovative ways to reach young people, yet they have gradually become accepted as important parts of a spiritual ideal for all ages. What on earth has happened?

In The Juvenilization of American Christianity Thomas Bergler traces the way in which, over seventy-five years, youth ministries have breathed new vitality into four major American church traditions — African American, Evangelical, Mainline Protestant, and Roman Catholic. Bergler shows too how this “juvenilization” of churches has led to widespread spiritual immaturity, consumerism, and self-centeredness, popularizing a feel-good faith with neither intergenerational community nor theological literacy. Bergler’s critique further offers constructive suggestions for taming juvenilization. 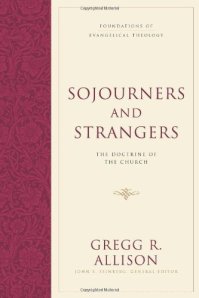 Sojourners and Strangers: The Doctrine of the Church (Foundations of Evangelical Theology) by Gregg R. Allisoon

What is a church? This can be a difficult question to answer and Christians have offered a variety of perspectives. Gregg Allison thus explores and synthesizes all that Scripture affirms about the new covenant people of God, capturing a full picture of the biblical church. He covers the topics of the church’s identity and characteristics; its growth through purity, unity, and discipline; its offices and leadership structures; its ordinances of baptism and the Lord’s Supper; and its ministries. Here is a rich approach to ecclesiology consisting of sustained doctrinal reflection and wise, practical application. 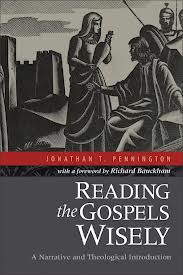 Reading the Gospels Wisely: A Narrative and Theological Introduction by Jonathan T. Pennington

This textbook on how to read the Gospels well can stand on its own as a guide to reading this New Testament genre as Scripture. It is also ideally suited to serve as a supplemental text to more conventional textbooks that discuss each Gospel systematically. Most textbooks tend to introduce students to historical-critical concerns but may be less adequate for showing how the Gospel narratives, read as Scripture within the canonical framework of the entire New Testament and the whole Bible, yield material for theological reflection and moral edification.

Pennington neither dismisses nor duplicates the results of current historical-critical work on the Gospels as historical sources. Rather, he offers critically aware and hermeneutically intelligent instruction in reading the Gospels in order to hear their witness to Christ in a way that supports Christian application and proclamation. 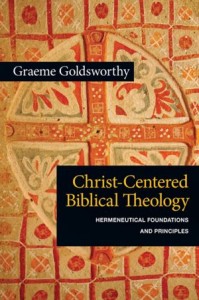 The appeal of biblical theology is that it provides a “big picture” that makes sense of the diversity of biblical literature. Through the lens of biblical theology the Bible ceases to be a mass of unconnected texts, but takes shape as a unified metanarrative connecting the story of Israel with that of Jesus. It presents the whole scene of God’s revelation as one mighty plan of salvation.

For fifty years Graeme Goldsworthy has been refining his understanding of biblical theology through his experiences as a student, pastor and teacher. In this valuable complement to his , Goldsworthy defends and refines the rationale for his approach, drawing especially on the work of Australian biblical scholar Donald Robinson.

Through the Eye of a Needle: Wealth, the Fall of Rome, and the Making of Christianity in the West, 350-550 AD by Peter Brown (Princeton University Press)

Jesus taught his followers that it is easier for a camel to go through the eye of a needle than for a rich man to enter heaven. Yet by the fall of Rome, the church was becoming rich beyond measure. Through the Eye of a Needle is a sweeping intellectual and social history of the vexing problem of wealth in Christianity in the waning days of the Roman Empire, written by the world’s foremost scholar of late antiquity.

Peter Brown examines the rise of the church through the lens of money and the challenges it posed to an institution that espoused the virtue of poverty and called avarice the root of all evil. Drawing on the writings of major Christian thinkers such as Augustine, Ambrose, and Jerome, Brown examines the controversies and changing attitudes toward money caused by the influx of new wealth into church coffers, and describes the spectacular acts of divestment by rich donors and their growing influence in an empire beset with crisis. He shows how the use of wealth for the care of the poor competed with older forms of philanthropy deeply rooted in the Roman world, and sheds light on the ordinary people who gave away their money in hopes of treasure in heaven.

Through the Eye of a Needle challenges the widely held notion that Christianity’s growing wealth sapped Rome of its ability to resist the barbarian invasions, and offers a fresh perspective on the social history of the church in late antiquity.

From the bestselling author of Losing Ground and The Bell Curve, this startling long-lens view shows how America is coming apart at the seams that historically have joined our classes.

In Coming Apart, Charles Murray explores the formation of American classes that are different in kind from anything we have ever known, focusing on whites as a way of driving home the fact that the trends he describes do not break along lines of race or ethnicity.

Drawing on five decades of statistics and research, Coming Apart demonstrates that a new upper class and a new lower class have diverged so far in core behaviors and values that they barely recognize their underlying American kinship—divergence that has nothing to do with income inequality and that has grown during good economic times and bad.

The top and bottom of white America increasingly live in different cultures, Murray argues, with the powerful upper class living in enclaves surrounded by their own kind, ignorant about life in mainstream America, and the lower class suffering from erosions of family and community life that strike at the heart of the pursuit of happiness. That divergence puts the success of the American project at risk.

The evidence in Coming Apart is about white America. Its message is about all of America.

The Intolerance of Tolerance by D.A. Carson

Tolerance currently occupies a very high place in Western societies: it is considered gauche, even boorish, to question it. In The Intolerance of Tolerance, however, questioning tolerance — or, at least, contemporary understandings of tolerance — is exactly what D. A . Carson does.

Carson traces the subtle but enormous shift in the way we have come to understand tolerance over recent years — from defending the rights of those who hold different beliefs to affirming all beliefs as equally valid and correct. He looks back at the history of this shift and discusses its implications for culture today, especially its bearing on democracy, discussions about good and evil, and Christian truth claims.

Using real-life examples that will sometimes arouse laughter and sometimes make the blood boil, Carson argues not only that the “new tolerance” is socially dangerous and intellectually debilitating but also that it actually leads to genuine intolerance of all who struggle to hold fast to their beliefs. 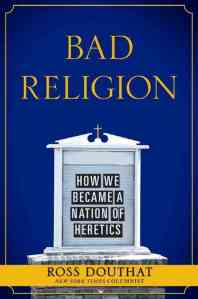 Bad Religion: How We Became a Nation of Heretics by Ross Douthat

As the youngest-ever op-ed columnist for the New York Times, Ross Douthat has emerged as one of the most provocative and influential voices of his generation. In Bad Religion he offers a masterful and hard-hitting account of how American Christianity has gone off the rails—and why it threatens to take American society with it.

Writing for an era dominated by recession, gridlock, and fears of American decline, Douthat exposes the spiritual roots of the nation’s political and economic crises. He argues that America’s problem isn’t too much religion, as a growing chorus of atheists have argued; nor is it an intolerant secularism, as many on the Christian right believe. Rather, it’s bad religion: the slow-motion collapse of traditional faith and the rise of a variety of pseudo-Christianities that stroke our egos, indulge our follies, and encourage our worst impulses.

These faiths speak from many pulpits—conservative and liberal, political and pop cultural, traditionally religious and fashionably “spiritual”—and many of their preachers claim a Christian warrant. But they are increasingly offering distortions of traditional Christianity—not the real thing. Christianity’s place in American life has increasingly been taken over, not by atheism, Douthat argues, but by heresy: debased versions of Christian faith that breed hubris, greed, and self-absorption.

In a story that moves from the 1950s to the age of Obama, he brilliantly charts institutional Christianity’s decline from a vigorous, mainstream, and bipartisan faith—which acted as a “vital center” and the moral force behind the civil rights movement—through the culture wars of the 1960s and 1970s to the polarizing debates of the present day. Ranging from Glenn Beck to Barack Obama, Eat Pray Love to Joel Osteen, and Oprah Winfrey to The Da Vinci Code, Douthat explores how the prosperity gospel’s mantra of “pray and grow rich,” a cult of self-esteem that reduces God to a life coach, and the warring political religions of left and right have crippled the country’s ability to confront our most pressing challenges and accelerated American decline.

His urgent call for a revival of traditional Christianity is sure to generate controversy, and it will be vital reading for all those concerned about the imperiled American future.

God Is Love: A Biblical and Systematic Theology by Gerald Bray

While there is no substitute for personal, faithful, and careful Bible reading and prayer, the Bible’s vast size and diversity can make distilling its truth a daunting task. Thus most Christians benefit from supplemental resources to help learn and apply what Scripture teaches.Renowned theologian, Gerald Bray has produced just such a resource in his new systematic theology. Though packed with robust content, he writes about this volume: “the aim . . . is to reach those who would not normally find systematic theology appealing or even comprehensible.”This volume is unique from others in that Bray traces the common theme of God’s love through the Bible categorically—from God’s love for himself and his creation to the cross as the ultimate expression of God’s love, among other categories. The centrality of God’s love in Bray’s theology reflects a deep conviction that the Bible shows us God for who he really is. This volume will be of interest to Christians seeking to grow in their faith. 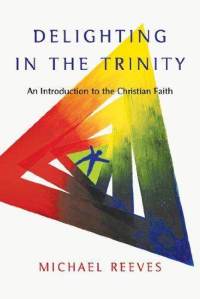 Delighting in the Trinity: an Introduction to the Christian Faith by Michael Reeves

In this brief and winsome book, Michael Reeves presents an introduction to the Christian faith that is rooted in the triune God. He takes cues from preachers and teachers down through the ages, setting key doctrines of creation, the person and work of Christ, and life in the Spirit into a simple framework of the Christian life. A rich and enjoyable read on the basic beliefs of Christianity that avoids dumbing down its profound and life changing truths.