I wrote this poem last year on Good Friday and thought I’d repost it here. It uses the last words of Christ from the cross throughout the poem.

A Poem For Good Friday

“Come down from the cross, if you are the Son of God!”
Crowd spoken mockery on Golgotha’s sod
Criminals, on either side of the Lamb
Both facing life’s final exam

“Aren’t you the Christ? Save yourself and us!”
Criminal’s jeering words in the form of a cuss.
“Jesus remember me when You come into Your Kingdom!”
Contrasting words, heart changing, unable to stay mum.

The lips of our Lord move a second time
Responding to the one convicted of crime
Looking straight at the man, knowing all of his vice
“Today you will be with me in paradise.”

That’s when His gaze came upon those He loved,
Some women, a disciple and the mother beloved.
“Dear woman, here is your son,” pronounced He to Mary.
“Here is your mother,” to John, while so wearied.

And then in the middle of that solemn day
Darkness hovered, black sky, not just gray
He who was holy became sin, no facade
And for the first time God was separated from God

“My God, my God, why have you forsaken me?”
Was the awful cry that came from that tree.
The only thing in all the world capable of dividing the Trinity
Was the sin of every man, every woman, every boy, every girl, yes even you and me.

Later knowing that all was completed
That sin and Satan would soon be defeated
Jesus, all divine, showed His humanity
“I am thirsty,” He said, displaying no vanity.

When He received the drink, Jesus said, “It is finished.”
His time had come, His work was accomplished.
“Father, into your hands I commit my spirit.”
With that, he bowed his head and gave up his spirit.

At that moment the world reacted
But most of humanity was too distracted
To notice the veil in the temple torn in two
From top to bottom what should we construe?

That Jesus’ death on the cross paved the way
For us to have access to God when we pray
The earth shook and the rocks split
On the day God was hit and we offered spit.

The bodies of some dead were raised to life that day
Holy people appeared in Jerusalem to convey
That Jesus is God, He is the way, Centurion and squad
Declared, “Surely He was the Son of God!”

They took His body, wrapped it in a shroud
Just as Pontius Pilate had allowed
To the tomb He was taken
Christ had been forsaken.

The Lord is coming soon is the word’s special meaning
Three days later, He arose and sin took a beating
He will come again soon to take those who are His
Truer words never spoken, it’s the truth, that it is

Will you be like humanity’s generations?
Too busy, distracted, for His interventions?
Don’t miss Calvary’s message of Christ’s great love
Offered to all of us who are undeserving of. 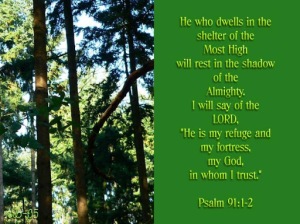 1 He who dwells in the shelter of the Most High will abide in the shadow of the Almighty. 2 I will say to the Lord, “My refuge and my fortress, my God, in whom I trust.”

One of my favorite pictures of God is the one painted by the psalmist in Psalm 91:1-2. Isn’t is wonderful to think about God sheltering us in the shadow of His wing? The psalmist was very familiar with danger. This psalm talks about some of the challenges that he went through. But, he truly felt like he had nothing to fear when God was by his side.

God wants us to experience the peace that comes when we abide in Him. That can only happen if we trust Him with our life. He is worthy of placing all of our cares upon.

Exodus 37 – Exodus 37 tells the story of Bezalel’s building of the ark, table, lampstand and altar. This man was truly gifted by God for the work that he was set apart for. It is interesting to see the details that went into building the tabernacle and the pieces of worship that were a part of the tabernacle.

Esther 4 – 14 For if you keep silent at this time, relief and deliverance will rise for the Jews from another place, but you and your father’s house will perish. And who knows whether you have not come to the kingdom for such a time as this?”

Esther 4 is one of the chapters of the Bible that people remember after reading. Mordecai has taken a very public and bold stance against the decision that was made by the monarchy. He would take a stand for the Jewish people, but his stand could not impact the decision that the monarch had made as much as Queen Esther could. he challenges Queen Esther to use the position that God has given her to make an impact on the king.

One of our primary roles as ambassadors of Christ is to take a stand for such a time as this. We need to look for opportunities to be spokespeople for Christ in each situation that we find ourselves in. Christ has put you in your home, your neighborhood, your friend group, your job, your club, your church, your sports, etc. for such a time as this.